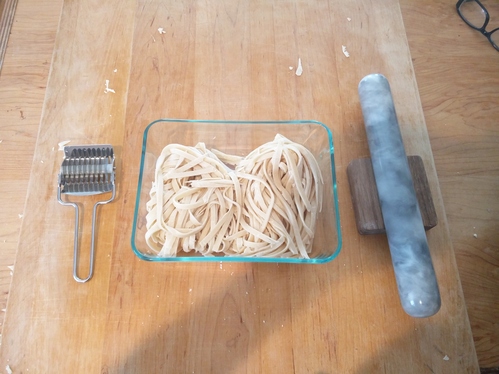 Few things in life are consistently enjoyable. Fresh pastais one of those things. Not only does it have delicious texture and flavor, but it is also surprisingly simple. Fresh eggless pasta is mostly flour and water. It is a true monument to the structural properties of gluten.

This document will mostly go over the techniques and tools that are involved when I make fresh pasta (which I've been doing weekly for several months now, and periodically for years before that). At the end, I will throw in a quick recipe for a Rioux-based cheese sauce that makes for a passable fettucine alfredo. 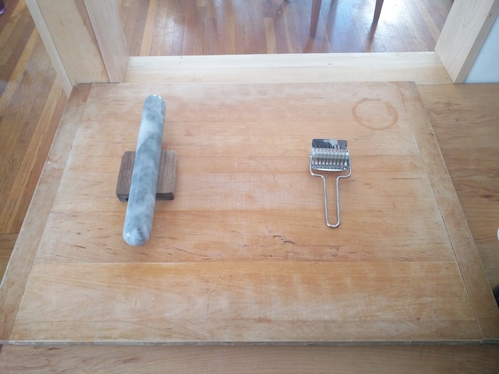 Most people use a pasta machine. I did too at one point. I do not anymore. Pasta machines are heavy and clunky and difficult to clean. Over the years, I've opted to roll and cut pasta by hand. To do this, I use a large flour board, a heavy marble rolling pin, and a fettucine cutter. It's a little more elbow grease, but the results are much better, especially when working with tougher and drier dough (which yields pasta with a better texture).

To make the dough, mix the flour and the salt togther. Make a hole in the center, and pour in the butter and water. Use a fork and make sure the butter and water is well mixed, then gradually work in the dry mixture surrounding it. Mix with the fork until you get a malleable flaky consistency. Dry is okay at this stage.

Dump the flaky mixture onto a working surface such as a flour board and begin to knead. There is very little moisture in this pasta dough, so kneading is done differently than a bread dough. Begin by collecting all the flaky bits in a flat but connected disk, and press down. Fold it half, and press it down into another disk, making sure to put any dry bits on top. Continue doing this for a few minutes until the dough becomes more plastic. If it still feels dry and crumbly, add a little water. But not too much.

A good pasta dough is arch nemesis of a pastry dough. It is dry to begin, and kneaded to the point where it is cohesive and very tough. This makes for a great chewy fresh pasta texture that almost tastes al dente.

When the dough feels well kneaded, place it in the refrigerator (presumably in some kind of container). Ideally it should chill overnight. It should at least chill for about an hour or so. I usually freeze batches for weeks at a time, then defrost them the day before I use.

The Rolling and the Cutting

The rolling and the cutting. This is where I've developed some technique (and muscle). I roll out the dough by hand and cut with a special fettucine cutter which looks like a pizza cutter with extra blades.

Rolling out the dough is the hardest part. This dough is tough to work with, but worth it. I recommend taking out the dough from the fridge and leaving it out for a few hours so it warms to room temperature. Also, using a good heavy rolling pin helps as well. If you are using a flour board, make sure it is secured and won't slide around. Learn to leverage your own body weight and play around with the height of the surface if you can.

Cut the dough in half with a knife. Take one of the halves, and begin working it on a lightly floured surface, pressing it down into a round disk. The idea here is to warm it up a little bit using your hands to make it more workable. 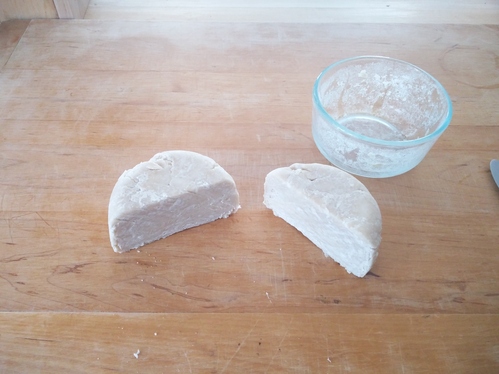 When it is reasonably flattened (about half an inch or so), begin rolling it out with a rolling pin. Be mindful about starting from the center and pushing out. It is really easy for the center to be too thick.

The way I work: push it out a little bit, then rotate 90 degrees. roll and rotate. I do this until it gets close to the desired thickness of ~2-3mm, and then I begin rolling it out vertically. 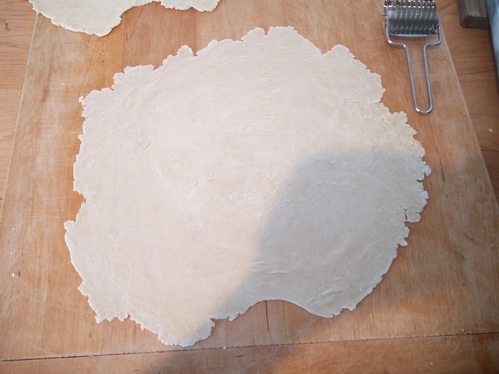 If you're using a pasta cutter, be sure to press firmly to get a clean cut. When it's all been cut up, collect it and put it aside. 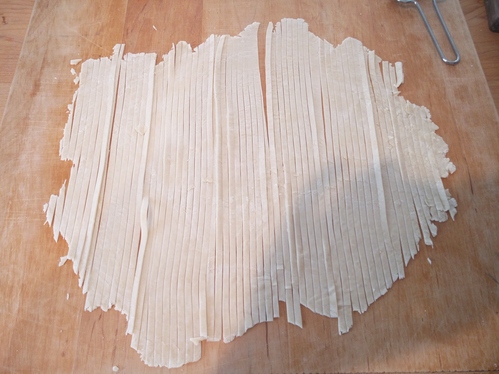 Repeat rolling and cutting process for the other half.

Bam. there's the fresh pasta. Below is a pasta strand showing the desired thickness I like: 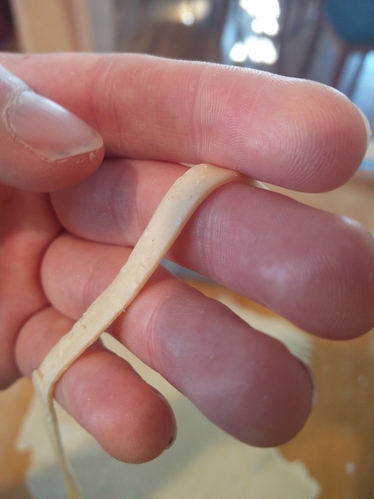 Get a big pot of water set to a rolling boil. optionally add salt for flavor, and a little bit of olive oil to help keep pasta from sticking. throw pasta in and stir it for a minute, making sure pasta separates and doesn't stick together. pasta is cooked when it floats to the top. Usually only takes a minute or two. 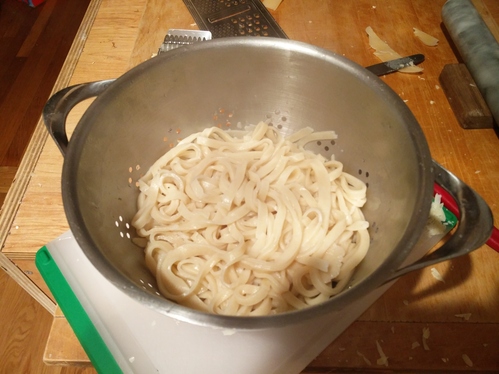 Now for the sauce. You'll need:

In a saucepan melt the butter. Then, whisk in the flour. heat on medium high heat until the flour-butter mixture reaches a golden-brown color. set to low heat, and gradually add in milk a few splashes at a time and stir until thick and smooth. continue adding in milk until desired consistency is obtained. add in the grated cheese and stir until melted.

Stir in freshly cooked and strained pasta into the cheese sauce. Gently mix until the pasta is evenly coated with the sauce.