Spigot is a set of simple graphical interfaces for Sporth. It is available for download on github and CCRMA-hosted gitlab.

Spigot is called inside of Sporth in the following way:

The spigot executable takes in 3 parameters in the following order, left to right:

The clock signal drives the various sequencers and programs in Spigot. When triggered, it causes Spigot to step.

The Spigot canvas is 193x193 pixels (or a 12x12 8x8 tileset plus 1pixel for borders). It uses a 24-bit RGB colorspace. The frame typically gets redrawn any time the clock signal triggers or a key input is pressed. There is a zoom factor which allows magnification.

Graphics in Spigot are spawned inside of Sporth, and they can close and open again when using Sporth as a live coding environment.

Spigot has a number of standard key combos so multiple interfaces can share the same key bindings:

For configuration files, Spigot uses Runt, a stack-based language. This tells Spigot what to load and how to load. Most importantly, Runt files are needed to select which interface you'd like to use, called a Spigot state.

In Spigot, a state is a particular predefined musical interface using a generaized internal C interface provided by Spigot. At the moment, there are only two interfaces made, but there is potential for growth. 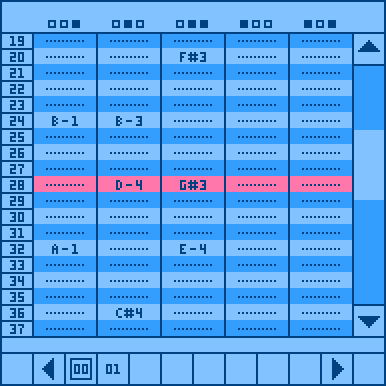 The Spigot state tracker is a music-tracker that builds on previous work with trackers in Sporth.

A typical runt file for tracker could look like this:

Here is a simple Sporth file that reads note data from channel 1 (leftmost): 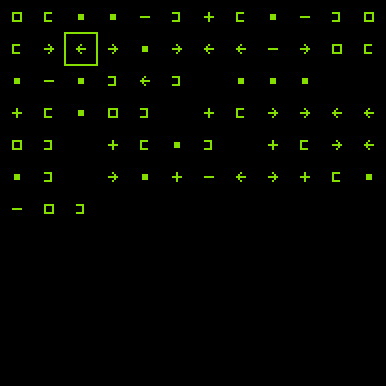 The Spigot state pbrain is a musical sequencer based on the pbrain language (a dialect of brainfuck). A "score" of BF code is parsed and drawn onto a grid. Every clock tick steps through the code, outputing the current symbol to a variable sporth. This variable can be used as a control signal for things like sequencers and values.

A simple runt file for pbrain could look like this:

And the corresponding Sporth file: