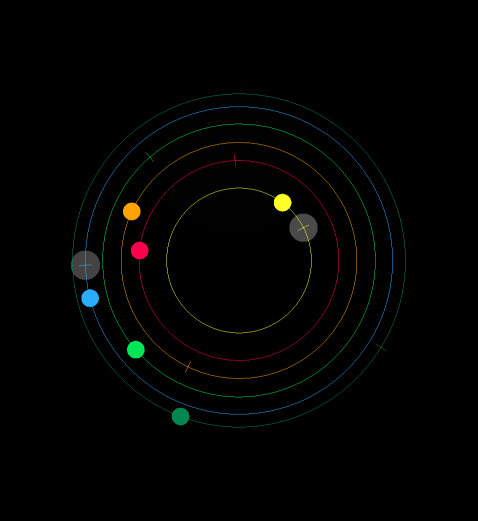 Moons is an isorhythmic circular sequencer. It is written using a combination of C and C++. All visuals are created using OpenGl; All the sounds are snythesized in realtime using Sporth, Soundpipe, and RTaudio.

The latest version of Moons can be found on github.

Moons requires libsporth (github) and the dev branch of libsoundpipe (github). On Linux, JACK and the development libraries will also need to be installed.

After these have been installed, you can then compile Moons with:

If this is compiled successfully, you should now have a binary called "moons" that you can run with:

If you do not want to install soundpipe and sporth on your machine, or do not have the right admin permissions to do so (like a CCRMA machine), you can place libsporth.a and libsoundpipe.a into the project folder in a directory you create called "libs". The header files can be placed in tthe top level drectory. From soundpipe, you will need "h/soundpipe.h". From Sporth, you will need "tmp.h", but it must be renamed to "sporth.h" (if tmp.h does not exist, run "make tmp.h" in the Sporth source).

After you have done all that, you can proceed with compiling Moons the usual way.

When Moons first starts up, you will be faced with a black screen with background music playig. Clicking somewhere will create a satellite that orbits an imaginary point at the center of the screen. Every time a satellite makes a full rotation, it will create a bell-like tone.

The farther away from the center you click, the larger the radius will be, and therefore the time it takes to make a full rotation. Where on the circle you decide to click will determine the note values. Currently, there are 7 distinct notes to choose from, each color coded.

'space' - starts/stops the sound (the reverb still stays on)

Moons divides up into an audio component, and a visual component, with a shared data struct between the two. Time-related things are done at audio-rate. In many ways, the video component is subordinate to the audio component.

When a new moon appears on-screen, a new voice is added to the synthesis engine. These active voices are then computed and summed together (this brute-force approach is preferred over a realtime scheduler). These voices are then patched into additional DSP objects in Sporth code. This is easy enough to do because Sporth supports arbitrary callback functions. Sporth code is also in charge of the non-diegetic generative musical accompaniment.

A single voice consists of a single FM operator pair being modulated by two triggerable envelopes (one for amplitude, the other for timbre). When a full rotation is made, the envelopes are triggered and there is audible sound. Since the envelopes have a fixed attack, hold, and decay pattern, they will only need to be triggered to turn on, and they will shut off by themselves. There is a maximum number of voices that can be played at once, and that number can be controlled via a macro in the source code.

The white "ripples" that you see are an interesting algorithm. To prevent memory overloading, there are only a finite number of ripples that can be created. Since their decay time never changes, I implemented a circular FIFO around an array of ripple data structures. At any given point in time, openGL knows how many ripples to draw, and where in the array of ripples to start drawing.

Much time was put into articulating what the sequencer should feel and look like before writing a single line of code. A semi-formal write-up can be found here, and concept art can be found here.